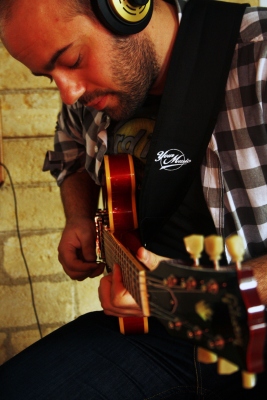 Roy (née Romualdo) Panebianco was born in Castrovillari (Calabria) on the 24th August 1983.
It was already at a very young age that his outstanding musical talent, which finally drew him to the guitar at the age of 13, manifested itself. The first chord he played marked the beginning of a mutual love affair.

After his early education in Castrovillari Roy moved to Rome at the age of 18, where he went on to complete his studies at the Saint Louis College of Music. In order to quench his never-ending thirst for musical knowledge he also simultaneously gained a degree in Musicology with a specialisation in Ethno Music at the Tor Vergata University.

During that time he participated twice in Berklee College of Music’s annual summer course. At this event, which is part of the Umbria Jazz Festival, Roy was fortunate enough to be awarded the title “Best Young Guitarist” by his teachers.

While it was Jazz that captured his musical interest initially and while this genre remains his main passion today, Roy’s music is in fact very varied, with styles such as blues, funk, soul, and electronic beats all being equally inspirational.

Roy’s personal style is also shaped by his numerous “musical journeys”. He started out performing in clubs and bars in New York City before moving to the Netherlands, where he settled for a while and where he divided his time between record studios and live gigs. However he soon decided to go travelling again, with his guitar as his only companion. This journey led him to places as far as Cuba, where he immersed himself in the country’s musical and cultural heritage. Berlin, a hub for electronic and experimental music, may have marked the final destination of his musical travels at the time, yet Roy continues to look for new ideas and musical inspiration wherever he goes.

Thanks to all this experience and paired with his great commitment, passion and dedication, Roy is today able to produce and express his very personal sound. He sees his first album as the realisation of the music that he had already created in his head many years ago.
One of the many areas Roy loves to experiment with is sonority, where he is particularly interested in semi-acoustic, acoustic and electric guitar.

Roy has received numerous awards and appreciations throughout Italy and has performed at venues as prestigious as Villa Celimontana and Alexanderplatz in Rome. He also appeared at numerous festivals such as the Peperoncino Jazz Festival, the Terni Jazz Fest, the Crocevia di Souni Jazz Festival in Agrate Brianza, the Cosenza Jazz Festival as well as the Suoni Etno-Jazz Festival.

Significant collaborations with artists including Marcello Rosa, Daniele Scannapieco, Fabio Accardi, Leo Corradi, Max Ionata, Gianluca Renzi, Marcello Surace, Antonio Onorato, Gegè Telesforo and Andrea Marcelli have already proven to be highly beneficial for the young guitarist. Roy has also accompanied many Italian and international vocalists on the guitar such as Crystal White, Jenny B. and Linda to name but a few.